Geomagnetic disturbances can have a serious effect on power systems. Currents induced in power lines flow to ground through substation transformers. Here they cause saturation of the transformer core which can lead to a variety of problems. Increased heating has caused transformers to burn out. Also, extra harmonics generated in the transformer produce unwanted relay operations, suddenly tripping out power lines. The stability of the whole system can also be affected as compensators switch out of service. Such a sequence of events led to the Quebec blackout of March 13, 1989, which left the whole province without power for over 9 hours.

Geomagnetically induced currents (GIC) are driven by the electric fields produced by the magnetic field variations that occur during a geomagnetic disturbance. Because of their low frequency compared to the AC frequency, the geomagnetically induced currents appear to a transformer as a slowly-varying DC current. GIC flowing through the transformer winding produces extra magnetisation which, during the half-cycles when the AC magnetisation is in the same direction, can saturate the core of the transformer. This results in a very spikey AC waveform with increased harmonic levels that can cause misoperation of relays and other equipment on the system and lead to problems ranging from trip-outs of individual lines to collapse of the whole system. 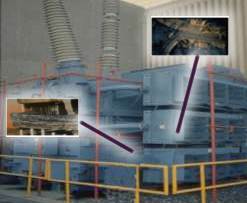 The costs to power system operators involve not only replacement of damaged equipment but also the loss of revenue from sale of power. The Quebec blackout on March 13, 1989 had a net cost of about $13.2 million; damaged equipment accounts for about $6.5 million of that estimated cost. The transformer at the Salem, New Jersey, nuclear generating station, that burnt-out during the March 13, 1989 magnetic disturbance, cost several million dollars to replace. Such expensive units are usually built to order and the delivery time is normally about one year. Unusually, in the Salem case, a replacement transformer was available and delivery and installation took only 6 weeks. Even so , having the transformer out of service restricted the power that could be delivered from the Salem generating station and the purchase of replacement power from neighbouring utilities cost about $17 million, far more than the cost of the transformer.

The vulnerability of a power system to geomagnetic disturbances is increased when the system is more heavily loaded. Increasing power demand and industry deregulation have both led to power systems being operated closer to their limits making them more vulnerable to outside disturbances. A distinctive feature of GIC effects on power systems is that the problems occur simultaneously on many systems. This is contrary to other types of power system problems, eg lighting strikes or equipment failures, which are more localised. The interconnections of modern power sytems are designed to provide safeguards againts the localised failures, but may be contributing to an increased vulnerability to GIC.